This summer in Toronto seems to be on the cool side. That said, I hope everyone has a good summer so far.

For the past ten years, VBA’s general meditation class has run every Saturday, 10:30am to 12 noon, and it is open to the public. In the past two years, the group of people who attend has stabilized about a dozen people. Similar to a book club or a photography club, we progressed to a discussion of more in-depth topics. Recently we began discussing a practice called “preliminary practice.” While meant for more seasoned practitioners, it seems surprisingly suited for a wide range of people, including beginners.

In discussing the potential for a new class, this seems to be a convenient point for people who are interested in joining a meditation group.

In the traditional form of verses to be recited, the preliminary practice appears to be religious on the surface. For some who have practiced any form of religion before, there is some force or someone that one can abide by. For example, in Christianity, one abides by God. More conventionally, one abides by some respected person, or you look up to a role model. Generally, you lean on someone or some principle for guidance.

In the Buddhist tradition, this guidance is often referred to as “light.” It is a metaphor as in the expression “to shed light upon.” The matter appears in front of you when it is illuminated. This guidance can show up in more surprising ways than one realizes. For example, pain is our body’s remarkable way of alerting you of something. It doesn’t show up only to annoy you.

Other times, you have a failure in doing a task.

Some may, by habit, want to get rid of the negative to attain the positive. But as the saying goes, one learns from mistakes or failures. The stomach ache might be indicative of an environmental factor. (Is it food poisoning? Is it stomach flu at your kids’ school? Not washing your hands?) The process of managing a pain, or in accomplishing a task, the negative is part of it. It is not only the positive that you possess. You have gone through the path from the negative to the positive. You are richer than you think.

What you do with it is the essence of the practice. Masters of the past have referred to this as plowing the fields so that you are ready to farm. Practically speaking, it is about the mind “staying put.” The mind can flutter. But observe bees. They buzz around the flowers getting honey. This in some ways reminds me of a scene in “Through the Looking Glass” where the White Queen tries to console Alice. 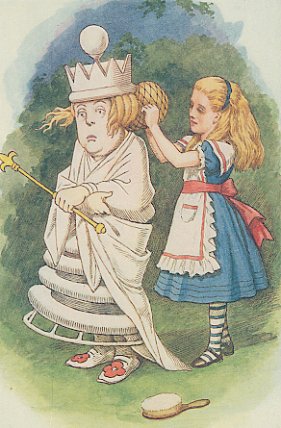 Alice could not help laughing at this, even in the midst of her tears. ‘Can YOU keep from crying by considering things?’ she asked.

‘That’s the way it’s done,’ the Queen said with great decision: ‘nobody can do two things at once, you know. Let’s consider your age to begin with—how old are you?’

‘I’m seven and a half exactly.’

‘You needn’t say “exactually,”‘ the Queen remarked: ‘I can believe it without that. Now I’ll give YOU something to believe. I’m just one hundred and one, five months and a day.’

‘I can’t believe THAT!’ said Alice.

‘Can’t you?’ the Queen said in a pitying tone. ‘Try again: draw a long breath, and shut your eyes.’

Alice laughed. ‘There’s no use trying,’ she said: ‘one CAN’T believe impossible things.’

‘I daresay you haven’t had much practice,’ said the Queen. ‘When I was your age, I always did it for half-an-hour a day. Why, sometimes I’ve believed as many as six impossible things before breakfast.’

With this note, we are inviting you to come to our Saturday morning class, 10:30am to 12 noon. All are welcome.