Translator’s note: H.H. Shenphen Dawa Norbu Rinpoche was a good friend of Master Tam. Tam wrote the following in memory of him. The original Chinese text can be found below the English translation. 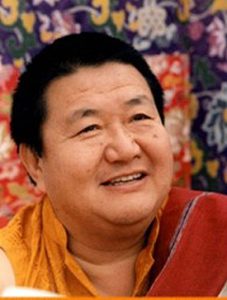 My good friend, H.H. Shenphen Dawa Rinpoche, the son of H.H. Dudjom Rinpoche, entered into Parinirvana on April 15 shortly after midnight. Prior to that, there were no signs of crisis.

The time when I interacted the most with Shenphen and his sisters was in the 1970s. Then Dudjom Rinpoche gave lectures in Hong Kong and gave me two Archarya empowerments. Among the two, one was with twenty or so people, another time it was a secret empowerment in his room. Because it was a secret empowerment, the three siblings and I became very close, as if I was part of the family, and I really miss that time of my life. Shenphen was not the type who liked to boast his knowledge of Buddhism, but I know that he was very familiar with the teachings of Dudjom Rinpoche. In many ways, Shenphen was my guide, my consultant. At one time, I couldn’t quite grasp what Dudjom Rinpoche said about snang ngos. Shenphen explained, you can think of it as the manifestation aspect, but in truth, it is a function, a capacity of Dharmakaya. Because of this ability, we can manifest in this world. Because of his explanation, I managed to associate snang ngos with Adāna.

There was a time he did not come to Hong Kong with his father, our relationship grew distant. Yet, he thought of me often. By then, he was practicing Dudjom Tersar, and was asked by Dudjom Rinpoche to translate some of the practices into English. He sent the English translation to me and asked me to translate them into Chinese. That said, he told me his father said I should follow his teachings instead of Dudjom Tersar in my practice. As well, Shenphen sent me Rinpoche’s To the Guru From Afar (Bla ma rgyand ’bad) along with the commentary that Shenphen wrote, which was also to be translated into Chinese. On and off, we had been in touch this way. The essence of the Great Perfection is everywhere his commentary. A person without any realization could not have authored it.

I don’t recall what year when Shenphen said he wanted a Long-Life ceremony for his longevity, where I contributed an offering. At the end, he offered me a large package of pills of long life and pills of nectar, which I placed in a drawer in my study for safekeeping. Unluckily, in 2003, there was a fire in my study. It so happened the whole drawer, including the nectar pills and the long life pills were all destroyed. I am always saddened by this incident.

The last time we were in contact, he asked me to translate Rinpoche’s The Nyingma School of Tibetan Buddhism, something he urged me to do many, many years ago. Along with Gyurme Dorje’s English translation, he also sent me the manuscript in Tibetan. Then I was occupied by other matters and didn’t get on with it. He told me to hurry so I passed the task on to my students as I took on the editor role. Now the task is completed finally, which resulted in two volumes. I had always wanted to send him a commemorative copy, but somehow I misplaced his contact information.

A few days ago, a student of mine told me that there would be a Long-Life ceremony for Shenphen. I was so very happy that I told the student to reach out to him. However, in the early hours of April 15, I had a feeling and I told the student to reach out again. By then, Shenphen Rinpoche had passed into Parinirvana. Upon hearing the news, reminiscing the past, I wrote this poem of praise in memory of Shenphen Dawa Rinpoche:

Born in the land of thunder and snow,
By wondrous transformation, a great terton master.
Also an emanation of his father’s father.
The twofold cause is very magnificent.

The age of decline, like a tangled web.
Lives like dusts, fluttering aimlessly.
Shenphen Guru, the Vajra mallet,
The worldly anchor guiding the blind.

Forty years of sowing in the West,
Dudjom Tersar, the Dharma Holder.
The nectar of dharma, falling like raindrops,
A cooling antidote for the afflicted world.

Guru like a green lotus, blossoming
Out of the mud, releasing a delicate bouquet.
Actualizing the pristine great equality,
In the Great Perfection, spontaneously immersed.

Shenphen Dawa Norbu, his dharma name.
For the sake of all, for sure he will return.
For the self and for the benefit of others,
The three Vajra syllables, radiantly complete.