Mañjuśrī Bodhisattva then arose from his seat in the great assembly. He bowed his head to the Buddha’s feet and circumambulated him three times to the right.

He then knelt down with his hands clasped and addressed the Buddha, saying: “Greatly Compassionate World Honoured One! Please, for all members of this assembly who have come for your dharma, teach us about the dharma practice of the Tathāgata’s primordially arisen pure causal ground. Also, please teach the bodhisattvas to arouse pure bodhicitta in the great vehicle and become free from all illnesses, such that they can cause the future sentient beings of the degenerate age who seek the great vehicle not to fall into mistaken views.” Having said this, he prostrated to the ground. He asked this question three times in succession.

Mañjuśrī is the first bodhisattva who asked questions. He asked, “Greatly Compassionate World Honoured One! Please, for all members of this assembly who have come for your dharma, teach us about the dharma practice of the Tathāgata’s primordially arisen pure causal ground.” As I have written in the introduction, this is in essence a request for a teaching on the Buddha-Within (Tathagatagarbha), because the Buddha-Within is the causal ground. 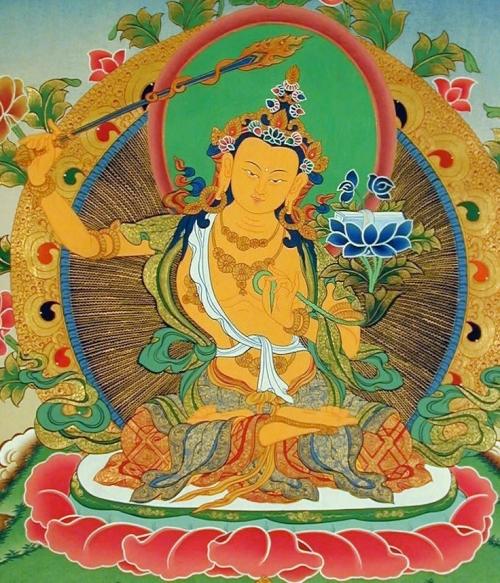 An ordinary being experiences through mind-consciousness, therefore, all experiences are also limited by conceptuality. The realm of such experiences is neither primordial and natural, nor is it since the beginningless time. Because the experiences are felt according to conceptuality, what is attained is at most the realm of conceptuality. This realm is unrefined, and can at best be considered conceptual. For example, consider the taste of a piece of candy, human beings would surely call it sweet, and perhaps a variety of labels to further describe the kind of sweetness that it has. This appears to be more refined. In reality, no matter how hard one tries to describe it, the description is never the true taste of this piece of candy. Words are not the actual taste, and therefore coarse and unrefined. One can also say that all conceptually created labels must be unrefined.

The body of tathāgata (如來法身) can be said to be primordially pure; the wisdom of tathāgata (如來法智) can be said to be primordially pure; the realm of tathāgata (如來法界) can be said to be primordially pure; this should be easily understood. Said this way, however, the mundane, the conventional, the ordinary is being left out. To express this primordial purity in a more fair and balanced way, then it should be called the Buddha-Within that is the natural coalescence of wisdom and consciousness since the beginningless time. This way, not only is it inclusive of the dharmakaya (realm and wisdom), it also embraces of all worlds as the spontaneous natural arising of dharmakaya. These worlds are also primordial and pure, they only become obscured and therefore defiled by the conceptuality of ordinary beings. Like a piece of candy, its taste is naturally as such, but people like to pile on the adjectives, if it has a coffee and dairy flavours, then it has to be café au lait. When someone tastes it, biased by the “café au lait” label, one has also become trapped by the concept of coffee and milk. But this taste experience comes from the add-on, and no longer the original taste through “what is exactly tasted by mind-itself.”

At this point, it should become clear what is this “primordially arisen pure causal ground.” The teaching that Mañjuśrī asked for is this causal ground and the dharma practice according to it, or as explained earlier, the practice to the Buddha-Within. Then, what good does it do? The scripture says,

“… the bodhisattvas arouse pure bodhicitta in the great vehicle and become free from all illnesses, such that they can cause the future sentient beings of the degenerate age who seek the great vehicle not to fall into mistaken views.”

In Buddha’s time, he established many, many teachings according to people’s many different aptitudes and preferences. Despite the differences, the end-goal is the same primordial awareness (“the exactly attained samādhi”). Mañjuśrī asked the Buddha for an overview, so that those who entered through the various teachings should now understand what dharma practice is the definitive practice. The entrances towards the Buddha-Within are many, they include the four noble truths, Consciousness-Only, Madhyamaka, and so on. If one becomes attached to a specific sectarian view and considers it the definitive, it then becomes an illness. Buddha’s teaching in the Sūtra of Perfect Enlightenment can be seen as a teaching to become free from illnesses.

This good is not only beneficial from the perspective of bodhisattvas, ordinary people can benefit as well. Therefore, the scripture refers to “the future sentient beings.” Those who seek the great vehicle (buddha-yāna) can benefit from the teaching in the Sūtra of Perfect Enlightenment “not to fall into mistaken views.” Nowadays, Buddha-Within is often labelled as non-Buddhist. Some malign it as a teaching catered only to outsiders. These are exactly mistaken views in the degenerate age (sad-dharma-vipralopa). If the Buddha-Within is merely an introduction to Buddhism catered to outsiders, why bothered illustrating it with so many scriptures? Here, right at the opening, we have Mañjuśrī inquiring into the Buddha-Within. The entire scripture itself is all about the practice of the Buddha-Within. To perfect enlightenment, it is to perfect awareness of the body, wisdom, and realm of tathāgata, the perfect awareness of the coalescent Buddha-Within realm of wisdom and consciousness.

During the latter days of dharma, it has become typical to accuse Buddhist fundamental teachings as inauthentic. The Sūtra of Perfect Enlightenment is the root scripture for Huayan school; the Golden Light Sūtra (Suvarṇaprabhāsottamasūtrendrarājaḥ) is the root scripture for Tiantai school; Śūraṅgama Sūtra is the fundamental scripture for the Buddhist practice; Arousing Faith in the Mahāyāna is the fundamental discourse for entering the one Buddha vehicle. These scriptures have all been maligned as forgeries. While their content may appear profoundly obscured, not a single detail contradicts the teaching of Buddha. What kind of a person is capable of creating a forgery, for what purpose and to what end? A person who is capable of writing such texts, they could have used their own name to publish it. Those who were able to present the view and the practice in these scriptures, they were at least bodhisattvas at an advanced level. A highly accomplished bodhisattvas would authored forgeries? Given the circumstances, the line in the scripture on “caus[ing] the future sentient beings of the degenerate age who seek the great vehicle not to fall into mistaken views” has become loud and clear.

This concludes the discussion on Mañjuśrī’s question. We will discuss Buddha’s answer next.