Then Samantabhadra Bodhisattva rose from his seat in the great assembly. He bowed to the Buddha’s feet and circumambulated him three times to the right. He knelt down with his hands clasped, and said to the Buddha: “Greatly Compassionate World Honoured One. I would like to ask for all the bodhisattvas at this assembly and for the sentient beings of the degenerate age who are practicing Mahāyāna: Please reveal the expedient stages of practice and let them hear of this pure realm of perfect enlightenment. How should we practice?”

“World Honoured One, if these sentient beings know about illusion, and that body and mind are also illusion, how can they remedy illusion using illusion? If all illusory natures are completely annihilated, then there is no mind. Who is going to carry out the practice? Moreover, based on this, how can you teach the practice of illusion? If all sentient beings originally do not practice, then they will remain forever trapped within the illusion of life and death. Not having penetrated the realm of the illusory, how will they liberate the mind that is trapped in false conceptualization?”

“I implore you on behalf of all the bodhisattvas at this assembly, as well as for all sentient beings of the degenerate age, to teach the gradual practice of expedient means to cause sentient beings to be eternally free from all illusions?” Having said this, he prostrated fully to the ground. He asked this question three times in succession.

Samantabhadra is the second bodhisattva posing questions to Buddha, but in terms of the practice, he was the first one. The crux of his questions was, how one practices the pure realm of perfect awareness. 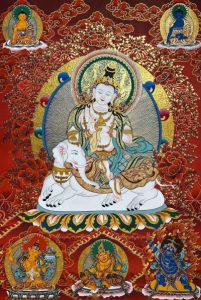 There are three primary samādhi in the practice of Buddah-Within. The first is the illusory samādhi that allows the observation of all worldly phenomena are like illusion. The second is Śūraṅgama samādhi (楞嚴定) that breaks free of the consciousness realm to enter into the wisdom realm, transcending all worldly conceptualization, entering into the virtue of dharmakaya, whereby one enters dharmakaya with further practices abiding to this virtue. The final samādhi is the vajra-like samādhi prior to the accomplishment of Buddhahood, where the coalescent realm of wisdom and consciousness possesses seven indestructible qualities (vajra-like). This observation leads to the direct realization of the Buddha-Within, the direct realization to the profound prajñā pāramitā, the direct realization entering non-duality. Samantabhadra’s questions lead to the preliminary practices entering the first samādhi. Entering the illusory samādhi is essentially the entrance to the practice of the Buddha-Within, which is also the great-dhāraṇī entrance of practicing perfect enlightenment.