Sneak Preview on The Secret Collection 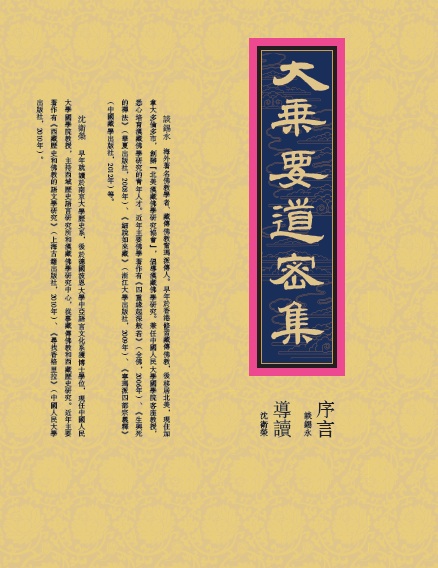 In Chinese with Foreword and Introduction in Chinese and English

Tibetan Buddhism was practiced in the Mongol royal court during the Yuan dynasty (1271–1368). The royal approval of the religion provided an entrance to China for the spreading of Buddhism. And yet, there are few historical, let alone first-hand, documents recording the history of Buddhism during this period of time. Whether it is official record Yuanshi (元史) or the unofficial one Genshen waishi (庚申外史), there are only a handful of paragraphs describing the practice, exoteric or esoteric alike. Outsiders tend to record more myths than truths. As fictional entertainment for the common folk, tantric Buddhist practices were seen “as something evil and shamanic from an exotic land.” As late as the early 20th century, western scholars still cast an erotic light à la tantric sex. Given its legitimacy but a lack of legitimate treatment, this is indeed a puzzle.

The Khara Khoto Collection was a collection of tantric practices widely circulating in the Tangut Kingdom of Xia (1038–1227). Xia occupied a region what is now Northwestern part of China and parts of Inner and Outer Mongolia. It is also situated along the trade route between China and countries in Central Eurasia and farther west. Tracing this route would connect Tibet and China where Xia provided an entrance. On closer examination, the two collections have considerable overlap that the Tangut version can now shed light on the centuries-old misunderstanding on Tibetan Buddhism in China and elsewhere.

Going beyond the restriction of the Chinese language in The Secret Collection, Shen and his team were able to decipher the Chinese translations in The Secret Collection were often rooted in the original texts written in Tangut or Tibetan, such as verbal transcription of a name (e.g., “kowtow”, borrowed from the Chinese phrase with a similar pronunciation to mean “showing deep respect” or “sucking up”). Knowing the root source texts, Shen was now able to uncover many more texts from Beijing’s National Library and Taiwan’s National Palace Museum. These texts were never considered by other scholars before. Suddenly, Shen went from having nothing to find himself sitting on a goldmine.

The Secret Collection on the Essential Mahāyāna Path follows Shen’s journey into discovering how different sects of Tibetan Buddhism found their way into China. Amidst the ever changing cultural and political environment in China from Xia to Yuan to even Ming dynasties, Shen was able to break free of the language constraints encountered by previous scholars. Venturing into historical resources written in Tangut, Mongolian and Tibetan, Shen paints a picture of how Buddhism morphed itself with the change of the ruling class for ease of transmission. More interesting, immersed in the religious details, one gets a glimpse of the different cultures were much closer allies than indicated by past historians.

The Secret Collection comes with a preface written by Master Tam Shek-Wing. Highlighting the relevant doctrinal view from Sa skya and rNying ma traditions, Tam presents a reading guide to texts in The Secret Collection and the overall framework to the associated meditation system of basis, path and fruition. Of interest to keen practitioners and scholars alike, it is published by Peking University Press.

A Stroke of Colour in a Spring Breeze (一枝春色喜風吹) by Master Tam, painted on the first day of Chinese New Year, Feb. 1, 2022.