Then the bodhisattva Universal Vision arose from his seat in the great assembly. He bowed to the Buddha’s feet and circumambulated him three times to the right. He knelt down with his hands clasped and addressed the Buddha, saying: “Greatly Compassionate World Honoured One. I beg of you on behalf of the bodhisattvas of this assembly and the sentient beings of the degenerate age, to expound on the bodhisattvas’ stages and practice. How should they think? How should they abide? For sentient beings who have not yet awakened, what kinds of expedient means should be devised to cause them all to awaken?”

“World Honoured One, if these sentient beings lack the correct expedients and correct thought, then when they hear you explain this samādhi, confusion will arise in their minds and they will be unable to awaken and enter. Please arouse your compassion for us and for the sentient beings of the degenerate age, and provisionally explain these expedient methods.” Having said this, he prostrated himself to the ground. He made this request three times in succession.

The bodhisattva Universal Vision was the third to pose questions to Buddha, but in terms of the practice, he was the second. His question was, in terms of the stages of practice, how should one think, and how should one abide in the practice given this thinking? As well, for the beings who have yet to become aware of the illusion, what kind of expedient means would lead to this awareness? 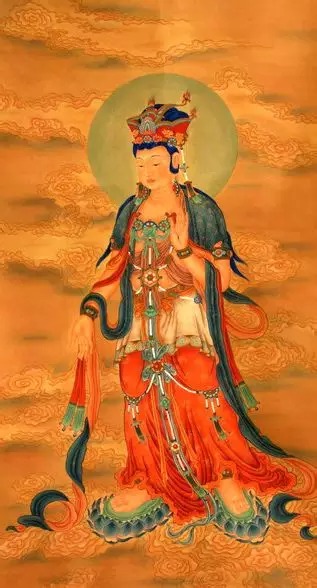 Asked this way, Universal Vision was inquiring into the “gradual practice” to the “sudden awakening.” Those of sharp faculties, the sudden awakening does not depend on a specific practice, may even attain sudden realization. Previously, Mañjuśrī inquired into the causal ground, but did not inquire into the practice itself. His question was a question for the sharp faculties, for whom an instruction by Buddha was a sufficient entrance to the perfectly enlightened marvelous mind, such that the primordial awareness is awakened instantly, leading to a direct realization. Samantabhadra questioned how the illusory body-and-mind could be used to observe the illusory ignorance. Here, Buddha revealed that the awareness remains intact despite the cessation of illusion, this is a sudden practice leading to a sudden realization. For those of sharp faculties, upon hearing this instruction, the illusory ignorance ceases to exist instantly, thereby awakening the perfectly enlightened mind. However, most sentient beings are not of sharp faculties, naturally the next questions were on the stages of expedient means for the non-sharp faculties, and hence Universal Vision’s questions.

Why the necessity of the stages of expedient means? Because all beings possess the beginningless illusory ignorance, considering the illusory mind with ignorance as the mind. Given Buddha’s instruction, knowing the cessation of illusions is not the cessation of the awareness, knowing this awareness is primordially complete and not newly attained from the practice, then it becomes important to know, how one can follow the stages of practice to allow the sudden awakening of awareness.

This is also why Universal Vision said, without the “correct expedients and correct thought,” then when they hear Buddha explain the illusory samādhi, “confusion will arise in their minds and they will be unable to awaken and enter.” Because beings have become habitually used to the illusory mind perceiving the illusory world, one may perceive this to mean that there would be no feelings possible when departed from the illusory, which is of course a negative and mistaken interpretation. Take eating a candy as an example. Most people would take the concept of “sweet” to experience the candy, as well as all sorts of concepts to distinguish its taste, such as, this candy is sweet, that one is not; this one is fruity, that one is milky. Sweet, not sweet, fruity, or milky, they are all illusory like sky flowers. Seen this way, some may become confused and negative, believing that one cannot taste the candy if not through these concepts. They do not know that taste that is beyond conceptuality is when the true taste arises. Therefore, Universal Vision pleaded the Buddha for a “provisional explanation” of the expedient means. (The practice through verbal explanation is of course conceptual, and hence the label “provisional.”) This way, sentient beings can enter the stages of practice, attaining the illusory samādhi, surpassing conceptuality to reveal the truth.

This concludes Universal Vision’s inquiry on the expedient means into the stages of practice.