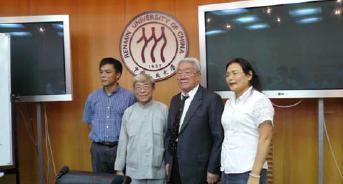 In August 2007, Master Tam Shek-wing, was invited by the Renmin University of China to give a series of talks on Tibetan Buddhism, particularly on the Tathagatagarbha doctrine or “the Buddha-within.”

This invitation demonstrates a growing interest in Buddhism in China among the Chinese scholars, particularly in Tibetan Buddhism and its relation to Chinese Buddhism. Towards the end, all the scholars expressed a desire for Master Tam to return as a visiting professor.

In June 2008, the Sino-Tibetan Buddhist Studies Association in North America (STBSA) and the school of Chinese Classics at the Renmin University of China established the Centre for Sino-Tibetan Buddhist Studies. The goal was to establish Renmin University as one of the major international research centres in Buddhism. This historical event marks the beginning of a cultural and international collaboration between Chinese and Canadian scholars to promote academic exchange on Buddhism Studies. It is the first academic Religious Studies collaboration of its kind.

Tibetan Buddhism, particularly Indo-Tibetan Buddhism, is a popular research area in the West. Its relationship with Chinese Buddhism has not been widely studied in academia. The mission of the Institute is to train a new generation of scholars in China, especially at the doctoral level, in Sino-Tibetan Buddhism. These scholars will help promote awareness of this growing field of studies, both within China and internationally through research and mentorship. The study of Sino-Tibetan Buddhism will offer a unique perspective which will complement the existing body of scholarly work in the field of Buddhist Studies, as well as new insight into Tibetan and Chinese Buddhism.

The partnership has since given rise to many opportunities for further international partnerships in Buddhism research. Up until now (2015), more than thirty students have embarked on their PhD or post-doctoral research in Germany, France, Japan and the United States.